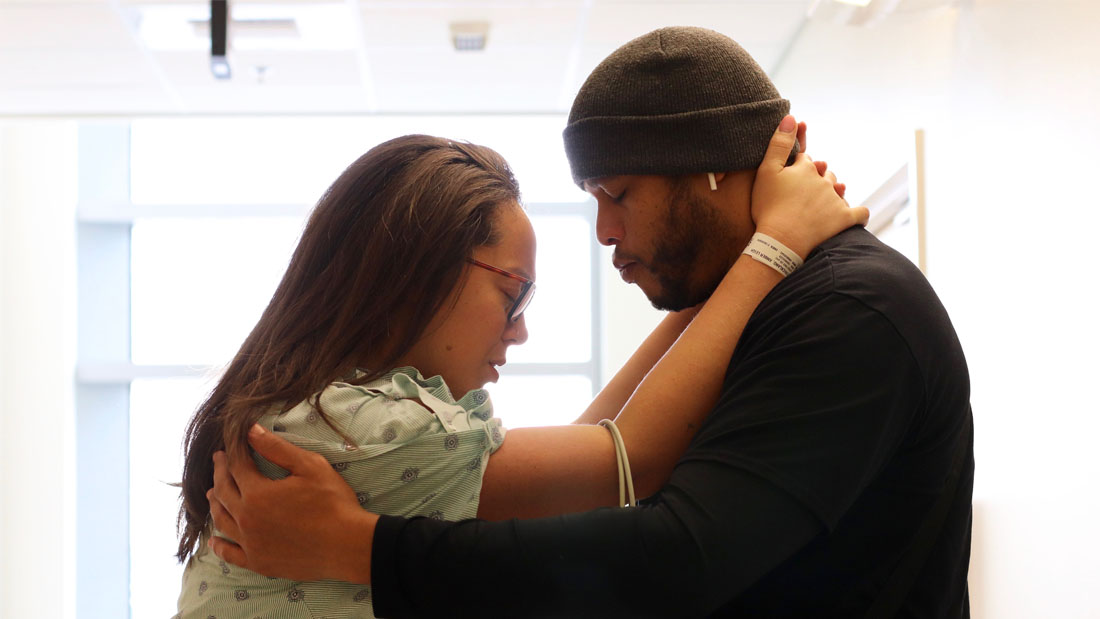 Posted at 16:53h in Birth Stories from a Doula's Prospective by Rhonda Greenfield 0 Comments
0 Likes
Share

This particular couple took my Bradley™ class and it was my smallest class since I had started my teaching.  It was just them 🙂 They were very easy to talk to and they took in the information so well.  They connected with each other on a level like I’d never seen before.  It was amazing to watch them interact during class and I knew this mama was in great hands when labor day came.

About halfway through the class they asked me about being their doula and I was so excited.  I had enjoyed not only getting to know them during class but also just watching them together.  It was clear they truly cared for one another and I was so excited for their baby to arrive to see that family bond grow even stronger.

As I was cleaning up the kids breakfast bowls I got a text from this mom asking about leaking fluids and the bloody show.  She had been having contractions the day before and was resting and walking through them.  This morning however she soaked herself with what she thought was the bloody show and then did it again so I was pretty certain if it was clear liquid tinged with blood it was her water breaking so I told her just to be on the safe side to call her health care provider.  Shortly after that text she texted again to meet them at the hospital.

I was no prepared for what I was about to witness.

I walked in and she was up moving around but the best part was her partner was right by her side helping her through ever moment.  These two worked together like no others I had seen before or since.  We kept moving, walking the halls and every time she stopped to squat, he stopped to squat with her.  If she stopped to lean and do deep breathing, he did the same.  If her breathing or noises got a little too high pitched he made the deeper noises so she could match him.  Every sway she made he made and it was a beautiful laboring dance between the two.

Her labor was long but she handled it like a champ never once complaining or giving up or saying she couldn’t do it.  And his support never wavered either!  Usually during a really long labor there are times of short naps or semi breaks but not for this couple.  He left once to get dinner and took not time at all to do so.  The labor carried on from the early morning into the wee hours of the night into the very early morning hours of the next day.  There was only one time this mama said anything that closely resembled a complaint and that is when she said “I need to sit down because my feet are hurting”.  I looked down at her feet and they were swollen, she’d been on her feet most of the time so it was time to rest.  She laid in the bed on her side and held her partners hand and they rested some but not a whole lot.  He finally encouraged her to get up and try moving again since we were nearing 24 hours of her water being broken and she really didn’t want any medical intervention.  Her night nurse was amazing helping her in any way possible making everything that much easier on this mama.  For blood pressure checks or any type of external exam she never asked her to move, she came to her where she was and at one point that was on the bathroom floor.  She worked around this mama to help her keep her space and not interrupt it as much as possible.  If a gold medal could go to a labor and delivery nurse, she should get 10 of them!

Then things went silent.  I looked over, mom was on the birthing ball and her partner sitting behind her, she was leaned back into his arms and they were both asleep.  How was this possible?  Then I realized, she hasn’t made any noises in some time now.  I had stopped timing her contractions at this point and decided to time the next couple of ones.  The doctor had been in a few hours prior and said she would be back after a couple of hours but we were going on almost 4 hours later.  As I timed her next few I realized they were spaced out further.  Could this be, could she be in second stage and ready to push?  I let them nap since the doctor hadn’t come back yet so they could build their strength for the next part – pushing!

The doctor walked in and she was just waking up and telling me she felt some pressure.  Her nurse thought maybe contractions were just spacing out and not actually time for pushing but I knew that a good sign pushing is here is that nice break in-between those contractions.  She got in the bed and was checked and sure enough it was time!  She was so excited and so was her coach!

As she started pushing baby was not handling the pushing very well and poor mama had to flip back and forth like a pancake from side to side after each contraction.  This little baby wouldn’t even let mama push through two contractions before she needed to flip to her other side.  Finally after a lot of hard work and turning (I can’t even imagine how that felt for her to have to continue moving during delivery!)

During their postpartum follow up visit they both expressed to me there were times when they were done but neither would express that thought to the other because they saw how awesome the other person was doing and didn’t want to bring that morale down.  They said they both admitted this to each other after the birth and were both so glad the other one didn’t say anything.  When I say they were a great team that doesn’t even begin to describe what I witnessed during that labor and delivery.

Sorry, the comment form is closed at this time.